Our new solar-powered NanoHaven has brought together three best-in-class technologies to synergistically treat Harmful Algae Blooms (HABs) and many other water problems with a Water Resource Recovery approach. It consists of a nanobubble aerator mounted on a robust BioHaven platform, along with solar panels and battery storage to provide low-cost operating power. It can be implemented in remote, off-grid spots, wastewater lagoons, and ponds and lakes of all shapes and sizes. Low-growing hyperaccumulator plants can be added to facilitate the removal of extreme pollutants if desired.

BioHaven Floating Islands remove the nutrients that cause HABs by cycling them into biofilm and periphyton and absorbing them into the food web. They work well passively but, when aeration is added, their performance improves fourfold.  Standard aeration consists of pumping bubbles into water which then rise and burst at the surface, forcing water to circulate and absorb oxygen from the atmosphere.
​
Nanobubbles are different.  With a diameter of less than 100 nm, these ultrafine bubbles can thoroughly aerate the water column from top to bottom. They do not rise but are dispersed by Brownian motion -  like salt dissolving into water.  The nanobubble is formed by gas injection, and depending on the technology, can comprise up to 90% pure oxygen, which is then slowly transferred to the water. Nanobubbles can remain in the water for weeks.

Nanobubbles have most impact on pond sediments, which are the most oxygen-deprived layer of a pond, where everything from unpleasant odors to methane emissions are generated. But this is also where the warmest water occurs in winter, and therefore where fish live to survive the cold. Nanobubble aeration injects oxygen without disturbing the stratification layers or stirring up the muck. The oxygen boosts the the bio-digestion of organic solids, while the fish receive a life-saving boost of pure air in their survival layer.

The BioHaven provides a necessary synergy with the nanobubble aeration. It both filters water by reducing Total Suspended Solids (TSS) and provides the surface area needed for the development of periphyton (which algae is cycled into), a natural food source for fish.

A nanobubble aerator mounted on a BioHaven platform is extremely mobile and can readily be moved to different positions in a lake as needed. Being solar powered, the operating costs are low. They are deployable in lakes that have no grid power and can be brought directly to the problem area of the lake.

​A solar-powered NanoHaven:
Combining BioHaven and nanobubble aeration is a game-changer in preventing and treating Harmful Algae Blooms and preventing methane emissions from lakes.
Contact Us Now! 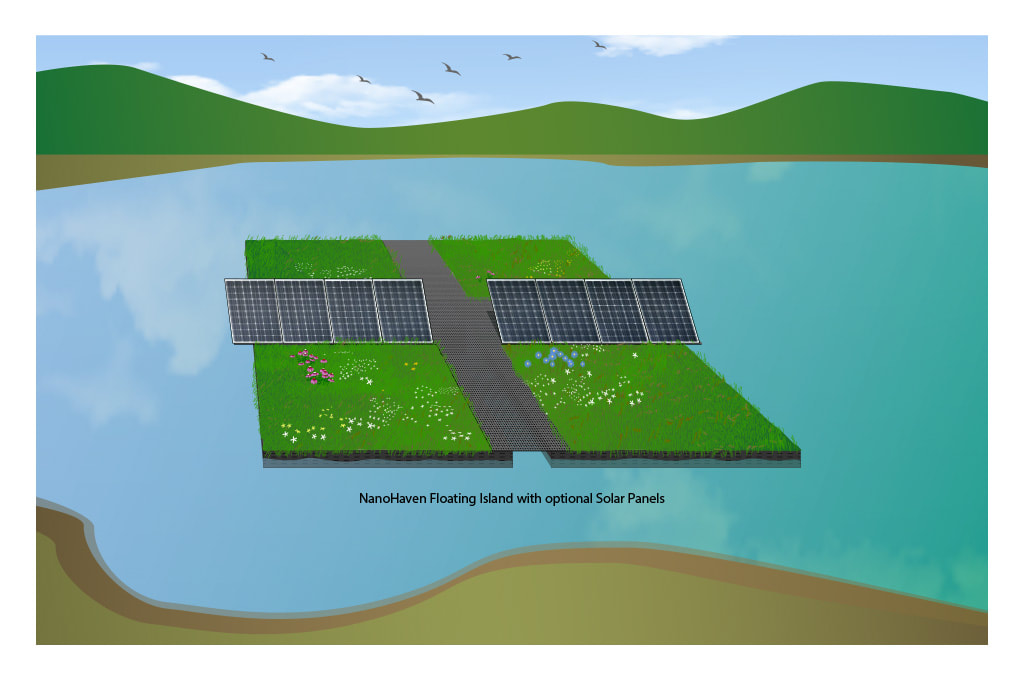 The NanoHaven is constructed with BioHaven Floating Breakwater modules, our specialized wave-dampening modules deployed for shoreline control. They are reinforced by a rigid platform on which the nanobubbler is mounted. Two racks of solar panels are fixed to the platform on a custom racking, which features an adjustable angle of tilt that is kept stable by the BioHaven. Battery storage is suspended beneath the platform to protect it from temperature variations and to provide ballast.  The nanobubbler is housed in a very secure, waterproof chamber, that - in the highly unlikely event of it ever becoming detached - would float.

The NanoHaven has been designed around the Moleaer Clear range of nanobubblers, which we believe deliver exceptional value and performance.

The NanoHaven may be planted with low-growing hyper-accumulator plants that provide a dense root mass to enhance the treatment surface area without occluding the solar panels. The performance of the plants may be further enhanced by the application of patented endophytes.

The unit is typically anchored with helical anchors driven into the bottom structure of the lake (where permitted). Alternative anchors include dead-weight anchors and tethers, and occasionally pilings. We may specify bungy-style tethers where there are significant fluctuations in water level.

The NanoHaven is a turnkey system.  It will be assembled on-site and launched by a team of qualified professionals.

The nanobubbler is supplied with remote monitoring equipment which can send wireless alerts when equipped with a SIM card attached to a cellular service. This early-warning system enables any issues to be dealt with immediately.  The NanoHaven can support up to six people. Access can be from a boat, or the unit can be towed close to shore.
​Solar power delivery will be monitored via a data logger incorporated into the solar array.
It will record:
1.    Watt-hours produced by the solar panels
2.    Battery charging/discharging current and voltage
3.    Motor on/off cycling
4.    Motor current draw (starting and running)
5.    Air temperature
Routine inspections of the fixtures and connections should be made frequently and always after a weather event.

A dissolved oxygen meter is supplied with the nanobubble aerator to measure its oxygen output. A handheld DO monitor or remote DO sensors should be purchased to monitor the impact on the waterbody, so that the NanoHaven can be moved when its desired impact has been achieved.

Heavy metals, PFAS, petroleum... biological removal, mechanical sequestration and phytoremediation work together to remove most contaminants of concern. Hyperaccumulator plants are our secret weapon for removing contaminants that even wetlands can't, such as chlorides.